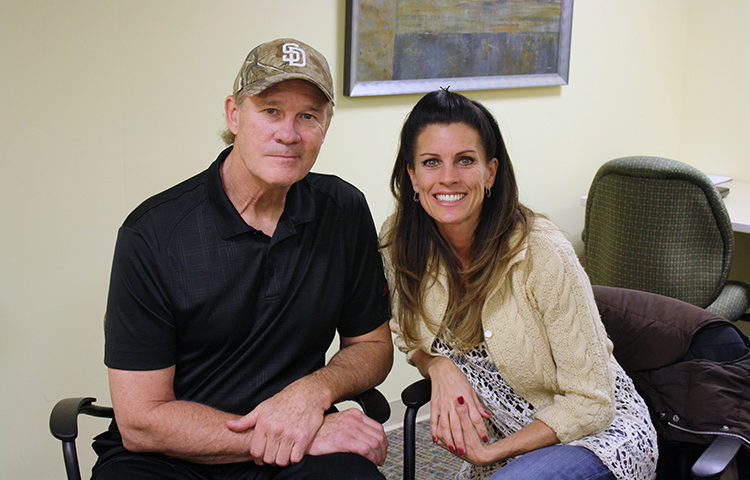 For many of our tenants, residents and their loved ones, falling is a common fear. There are many things we can do to prevent a fall: remove small floor rugs in walkways, wear comfortable shoes with treads and make sure we stay active and strong.

For Joe Senser, fall prevention was the last thing on his mind. Former Minnesota Vikings tight end, Joe was a 1,000 yard receiving Pro Bowl player who scored the very first touchdown at the Metrodome in 1982.  He is an active husband, father, grandfather and businessman.

Just 7 months ago, life changed drastically for Joe in an instant.

“Joe had a very severe stroke,” Amy Senser explained. “He’s not supposed to be here. They said he wasn’t going to make it.”  Joe nodded in agreement as he watched his wife’s eyes swell with tears.

Yet, here he was on a bright Friday morning: a regular with Ascend, determined to fight back. Not sure where to continue his next phase of recovery, the Sensers were referred by a friend to Saint Therese.

Joe visits Saint Therese of New Hope four days each week, armed with a cane in his left hand and Amy holding his right. Janet Bauer, his occupational therapist, concentrates on helping Joe rebuild strength in his arms and shoulders so he can re-learn normal movement patterns. Bauer’s efforts teach Joe new ways of doing the little things others may take for granted, such as brushing his teeth or buttoning a shirt.

“Occupational, physical and speech therapies with Ascend work as a collaborative team to improve Joe’s mobility, muscle strength and his ability to communicate throughout his recovery process,” Bauer said.

Although Joe’s ability to walk and talk diminished following his stroke, he has not lost his ambitious attitude or sense of humor. His first appointment is Cortney Place, a speech language pathologist who works with Joe to recover his voice. The two have developed a special bond, laughing together through their mistakes and celebrating the daily victories they achieve, no matter how small.

Amy sits next to Joe, holding his hand and smiling with every little success. She helps reinforce the articulation skills Place is focused on improving.

Joe’s eyes light up when he sees Iva Carey, lead physical therapist with Ascend, open the door. He gives Iva a thumbs-up and slowly meets Carey in the gym. Carey structures her time with Joe to focus on strength and balance, relearning how to walk and challenging him to continue making progress, which he says has been slow and steady.

“Working with Joe is rewarding because of his positive attitude. He’ll try anything. He’s an athlete so he’s familiar with being coached and pushed. He’s more willing to try something new or change his approach if I ask him,” Carey said.

Before no time, Carey has Joe comfortably fitted into the Solo-Step, a state-of-the-art overhead track and harness system designed to protect patients from falling during the rehabilitation process. Saint Therese has been home to this system for the last year.

“There are so many benefits to the Solo-Step. It’s easy to use, lightweight and non-restrictive. This system is a safe way to work with someone like Joe who is a different height or weight than me. I’m able to challenge him in ways I couldn’t before Saint Therese had this system,” Carey said.

Joe takes a few steps forward with Carey in front of him. He’s slow but he’s stable and very focused. The harness rotates with his body as he turns around to walk back to his starting point. Carey places a wood plank flat on the floor in front of where Joe is standing. He steps with one foot on the plank and swings the other foot over, successfully stepping over the obstacle Carey created. It may look easy but it’s taken Joe hard work and determination to get this far in his recovery.

“For him to fall would be disastrous. It’s my very worst fear,” said Amy with her hands clasped over her lips, intently watching Joe. She breathes a deep sigh of relief every time he clears the plank in celebration of his feat. “He’s a big, strong guy. The Solo-Step gives him freedom to move and the time he needs to renegotiate his movements with his mind. He wouldn’t be where he is without Saint Therese and the specialized equipment they offer.”

Iva clears Joe’s walking area of the plank and claps her hands together with a smile. She asks Joe if he wants to try showing everyone his putting skills. Joe’s eyes light up and he says, “Oh, yeah!”

The gym is filled with cheers for Joe as he swings the putter. Despite all the challenges, he manages to sink one in the putt cup. Amy pumps her fists in the air in triumph. He’s still scoring those points.

When asked about how he feels, Joe says, “I feel steady. I feel safe walking”. That in itself is a huge accomplishment.

To learn more about Ascend, visit the Ascend website. 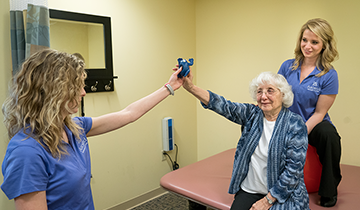